Wild have a good New Year; Zucker needs a chance 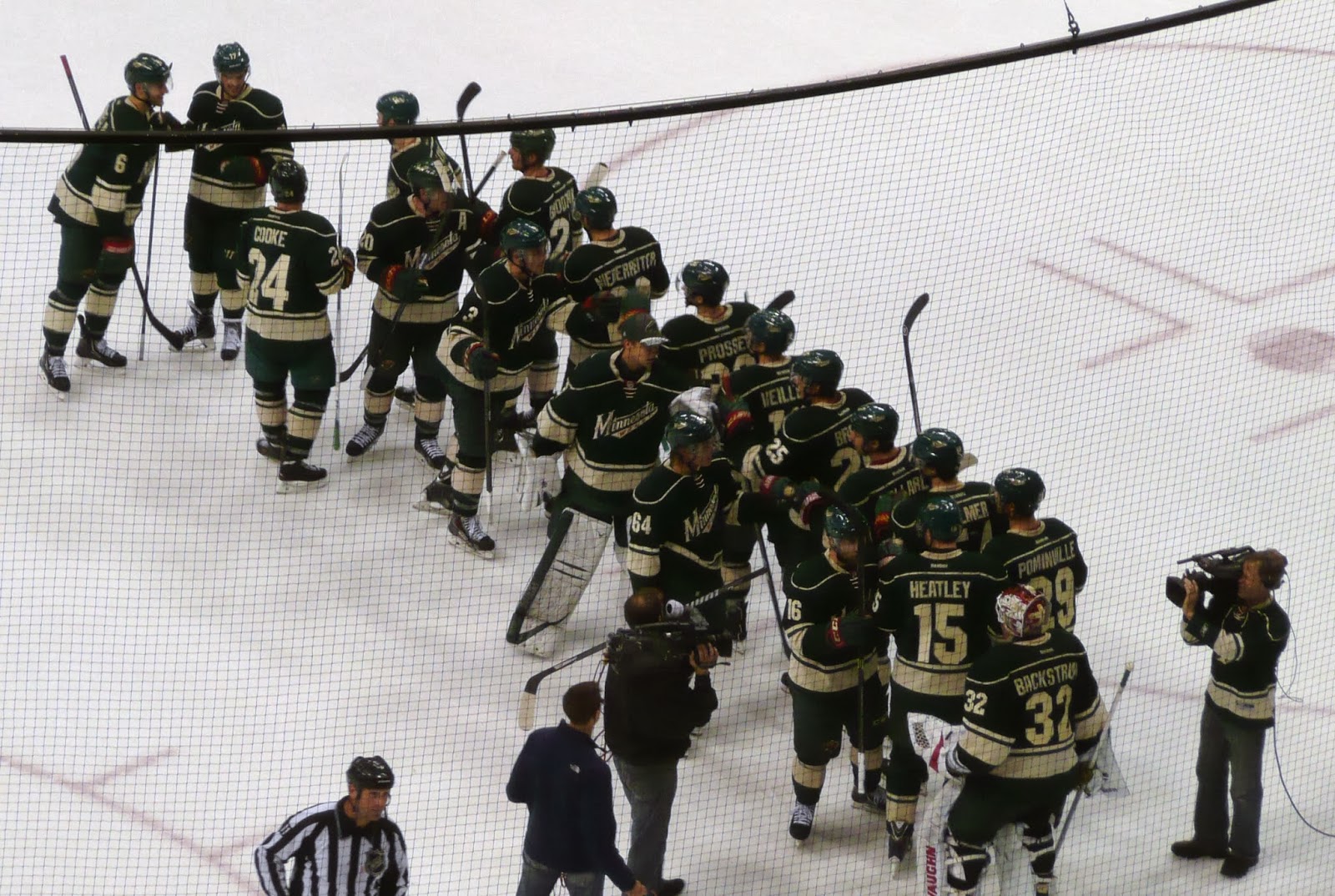 Despite some woes in December, the Minnesota Wild rang in 2014 with a 9-4-1 record in January. Among the highlights was a 4-2 win Tuesday in Anaheim, where the Wild became just the second team this season to beat the Ducks in regulation on their home ice. Then there was the 2-1 home win Jan. 23 against the defending Stanley Cup Champion Chicago Blackhawks.


My family and I attended the Jan. 4 game against Washington, when things weren't looking so good, especially for head coach Mike Yeo. We even made sure to take a few pictures of him behind the bench, just in case he was fired the next day. His days seemed numbered, to some. It wasn't looking good early either, as the Wild dug themselves a hole before grabbing a 5-3 win, thanks in part to the first-career hat trick from defenseman Ryan Suter.

Everybody hurts, sometimes
Injuries have still sidelined some key players, like captain Mikko Koivu and baby-face defenseman Jared Spurgeon. But Zach Parise (who was just named the captain of the Team USA hockey team for the upcoming Olympics) returned from his time off to heal a foot injury, and he's notched a few multi-point games. He scored two goals Thursday in Colorado in a 5-4 loss.

The goaltending situation isn't the best, with Josh Harding out of commission and Niklas Backstrom nursing an injury as well. However, it's allowed young Darcy Kuemper to start a few games in a row and really shine in between the pipes. As I mentioned, he's still a young goaltender, but I like what I see so far.

Zucker really shines
Then there's Jason Zucker, another youngster on the team. He's impressed me with his speed, skill and shoot-first mentality. It's refreshing to see a guy out there working hard, shooting the puck, rather than simply dumping the puck in or looking to see who he can pass it to.

Zucker has been on what seems like a constant yo-yo between the Wild and the minor-league Iowa club. I don't even have to look it up to know if he's been up and down more than any of his teammates this year. I'd say it's a safe bet.

In January, Zucker also found his stride, thanks to some of the others being down because of injury. He has four goals in 18 games this season. It was great to see him getting points.

Yeo keeps demoting Zucker
I'm not sure what the reasoning is, but it appears that Yeo doesn't agree with the strength of Zucker's play and his numbers. First of all, he demoted Zucker to the fourth line. For the past three games, Yeo's scratched Zucker to put tough guy Mike Rupp in the lineup. Yes, Rupp, who seems to have a reserved seat in the press box this season as a healthy scratch more often than not. He's played a total of 11 games this season.

I think the only reason Zucker's even still with the big club is because of, again, injuries.

With a tough schedule of games against the San Jose Sharks, Ducks and Aves, I fully understand why Yeo wanted Rupp's physical presence in the lineup. But I don't get why it had to be a Zucker-for-Rupp situation. You're removing a guy who's put up points for the team.

Pick on somebody else
Meanwhile, there's veteran Dany Heatley, a guy who's past his prime and now up on the top line. Or what about center Kyle Brodziak? He had a long goal drought finally snapped not long ago - with an empty net goal that was awarded to him (It would've been a penalty shot.). Let's put it this way. Brodziak and Zucker each have four goals this season. Except Brodziak has played 56 games to Zucker's 18. You do the math.

Oh, and one of the goals for the Aves was deflected (or tipped, or accidentally shot...) into the goal off Brodziak's stick.

I know Zucker and Brodziak play different positions, so maybe that's a factor, too. I'd just like to see Zucker get more of a chance.

Of course, I'm not a hockey coach. So I want to believe there's some reasonable explanation as to why Zucker isn't getting a fair shake, in my eyes. I'd just like to know what it is.
Posted by Heather Rule at 4:58 PM No comments:

When I tell people I enjoy watching sports, I usually list off hockey and baseball as the two biggies, adding in that I played tennis in high school. Then there's the one that usually gets the raised-brow reaction: I'm a fan of IndyCar racing.

A couple people have said to me that they just don't picture me being a race fan. Well, I am.

I've been a fan of auto racing for a good chunk of my life. Mostly because I was around it so much. I grew up going to CART (Championship Auto Racing Teams) races and watching them on television. It's all thanks to my dad, really. He's been a lifelong racing fan, back in the days before the Indianapolis 500 was televised and he listened to the laps on the radio.

Good ol' RA
We started making annual trips to the great road course Road America in Elkhart Lake, Wis. It's a great four-mile track that was always on IndyCar's schedule, because drivers and fans alike loved it. We didn't have family camping trips or fishing trips; that just wasn't our thing. We went to the races.

There's even video evidence of my dedication. It was 1990, so I was just about 4 years old, and we were over at Road America for the IndyCar festivities. I guess I was paying attention even then, because when Emerson Fittipaldi drove by, I called out his nickname: "Emmo!" My dad just informed me that was my first race.

We visited other tracks throughout the years as well: The converted-airport track in Cleveland, Mid-Ohio, Long Beach, Iowa and of course, the Indianapolis Motor Speedway. We've also visited Daytona, even seeing the large memorial there after Dale Earnhardt was killed in 2001. But open-wheel racing tops NASCAR for us, definitely.

I also wrote for Examiner.com in 2010, focusing on Marco Andretti. It was fun to keep up with the races and then write about them. Too bad I didn't get to attend the entire season of races. Now that would've been fun.

What sticks out for me
Some memories are more vivid than others. We learned after a soggy and constantly-rainy weekend at Road America in '98, I believe, to always bring along ponchos and extra shoes. I remember watching the Fontana race in 1999 when Greg Moore was killed, then seeing my dad's head drop when I told him what happened after he got home that day.

We've seen many drivers while walking around the paddock areas over the years. I met Memo Gidley a couple times; we share a birthday. Dad snapped a photo with me and driver Katherine Legge in Cleveland, and I got her autograph on that photo just as sprinkles started falling at Road America.

I also met a IndyCar support series driver in a hotel hot tub during the 2010 Mid-Ohio weekend. True story.

We attended the 2011 Indy 500 as a family and saw an exciting finish that turned out to be the late Dan Wheldon's final win of his career. Then I remember watching the horrible crash that killed him later that season.

A great father-daughter bond
My dad has so many great memories from racing over the years, too. It's fun to hear about this win or that horrific crash. I'll read something, or stumble across some crash videos in the middle of a YouTube binge from way back that I didn't know about. Ask dad, and he remembers.

I just finished reading a book my dad has, written by Dr. Steve Olvey, longtime medical director for CART, called, "Rapid Response: My Inside Story As A Motor Racing Life-Saver." It detailed many crashes he responded to over the years, and I learned a lot about how the sport and its safety evolved. It was an interesting read. (And if someone tries to tell you NASCAR was the first in many of the safety measures used, it's not true. CART led the way.)

But anyway, now you have a few highlights that might explain my love for open-wheel auto racing a little bit better. I'd recommend tuning in to a race sometime. Although, one of the race fan lessons is that television just doesn't do the sport justice.
Posted by Heather Rule at 10:17 PM No comments: