Looking at the Wild so far, overtime and injuries

As the Minnesota Wild prepare for game No. 20, it's already been an eventful season filled with long schedule breaks, a new overtime format, injuries and the flu bug - again. We're all just crossing our fingers that the mumps haven't returned. Yet.

The Wild is 11-5-3 in the most competitive division in the NHL, the Central in the Western Conference. They've kept pace with Nashville about mid-pack. They've had one of their greatest starts in franchise history, points-wise. Still, it'll be a tough task to go strong for 82 games in such a tough division.

They've played well at home (with the exception of the Nov. 5 3-2 loss to Nashville that I attended.) Every point counts, so it's good they've started off so well.

The beginning of the season was a little weird. It just was. Not only did the team have plenty of lengthy breaks in between games - thanks NHL - but they also kept getting teams that were on some pretty bad skids. Their first regulation loss came at the hands of those pesky Anaheim Ducks, a talented team that was beyond struggling. Then Columbus came to town, winless on the season.

New OT is OK
One cool thing about this season is the new 3-on-3 overtime format. The Wild got its first taste against the Kings, which ended in a loss but got the "moral victory point." After that game, I almost didn't care that the Wild lost. For one thing, they were lucky to get to OT anyway, plus they still hadn't lost in regulation to that point.

But I loved the 3-on-3 play. End-to-end, fast skating, breakaways abound. It was so fun to watch. I could definitely see why the NHL made this move to try and avoid the shootouts, by ending the game in overtime.

Obviously, it's an adjustment for the players. Goalies have to be more prepared for odd-man rushes. I think we've seen now that even the timing of line changes is magnified. Get off when you can, otherwise you might get stuck out on the ice for the winning goal against.

The Wild were 0-2 in overtime before they finally got a win against Carolina. I think the sample size might be too small so far to tell how they do in overtime. But another part of me wants to scrutinize and point out the mistakes. We'll see how it goes. If they go 2-11 in overtime sessions or something, then maybe it'll be the time to evaluate.

Injuries and flu bugs, oh my
The truth of any sports season is that injuries are part of it. That's the deal. Sometimes when it rains, it pours, however. Zach Parise sprained his MCL in that Nashville game, courtesy of James Neal. It was right away in the game, and Parise could barely get to the bench. They did alright without him for a couple games, but his presence is obviously missed. He's Parise, so I'll expect him back about a week or two before other players would return.

Tyler Graovac has been out since basically the start of the season with a groin injury. Justin Fontaine also has a sprained MCL. Marco Scandella is out with a lower body injury. It's led to a parade of players coming and going from Iowa.

Then there's the flu bug. This has to be two or three years now that a flu bug has gone around the locker room. It's puzzling because it seems like it's a new thing. Every night you wait to see the lineup card because you never know who'll be in uniform. Or who might skate warm-ups but is too sick to skate the game.

It's just one of those things, I guess. But again, at least it's not the mumps. 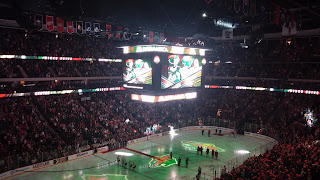