In my head, I had this blog already written before the game was over.

I was going to write about a great game from Darcy Kuemper against top-team Dallas, a couple beautiful goals at the hands of Thomas Vanek (1 goal, 1 assist), Jason Pominville finally scoring his first goal of the season Saturday and a bounce-back game for the Wild that pulled it up from the recent skid.

Yeah, well, then the third period happened. What was a 3-0 Wild lead after two periods turned into a 4-3 loss in overtime. No matter what happened in the game, that lead reversal is never a good sign.

It was the best of times...
Let's go through the good things anyway. The Wild came out with a little jump at the start, and Vanek scored his 10th goal of the season for a 1-0 lead. He shot from the circles and the puck made it through traffic. Off to a good start.

Later in the first period, we got a glimpse of why the team missed Justin Fontaine. His diving effort got the puck out of the Wild zone and up to Vanek, who drove into the offensive zone with Charlie Coyle. The 2-on-1 play was a beauty, with a great pass for a Coyle goal and a 2-0 lead. 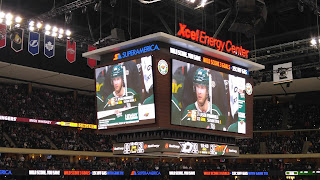 Now, time for the moment of the night that will likely be forgotten. At the time, it was huge. In a chuckling sorta way. Pominville scored his first goal of the season. No typos in that last sentence. After a bit of a slumping year last season, Pominville has been under fire regarding the goose egg under his goals category.

At least he got the monkey off his back, for now. Pominville was in the box for a penalty in the first that carried over. I watched him exit the box, break into the zone, accept a pass from Mikael Granlund and blast a shot past goaltender Antti Niemi. To be honest, I didn't see it hit the back of the net (from the other end of the ice where I was sitting).

I'll also admit that I knew who had the puck and I just assumed Pominville's shot went wide and/or over the top of the net. That's just what he does. It was still pretty cool to see his first goal of the year though, at 1:11 of the second.

It was the worst of times...
Unfortunately, that's about where fun for the night ended. The Wild still went into the second intermission up 3-0, but I kept an eye on the shots on goal all night and didn't like what I saw. The Stars won that battle 44-26.

I had a bad feeling early in the third. The Wild came out like a team that was going to sit on a 3-0 lead for the final 20 minutes, rather than keep pressuring. It was 3-1 about five minutes in. Then there was a big turning point. The Wild had a power play after Johnny Oduya was all class in cross checking Zach Parise in the back of the head.

The Wild didn't get much going with the extra man, and this time the finger pointing goes in Granlund's direction. He turned the puck over twice, badly, which led to a breakaway and shorthanded goal from one of the league's best, Jamie Benn. His 18th of the season made it 3-2. 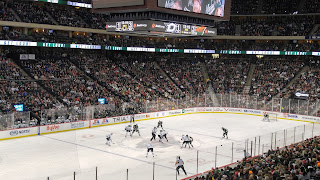 Then it just felt like the Wild tried to hang on, but you could feel it was only a matter of time before it would be a tie game. Sure enough, the Stars did just that. Coach Mike Yeo called his timeout and apparently was quite animated on the bench.

Whatever he said didn't work. The game continued on, with the Wild not generating much offense and Kuemper, who had an outstanding game, still standing on his head. With time ticking down to overtime, the Wild stood around and watched Dallas cycle the puck. That's such a frustrating thing to see; when a team gets caught watching like they're shorthanded. But they're not. It's 5-on-5.

Anyway, to overtime it went. I already knew that wasn't good, for many reasons, but also because the Wild have only won once in the extra session this season, while Dallas has zero "moral victory points" to its name.

Actually, the 3-on-3 overtime wasn't terrible for the Wild. They controlled the puck, but of course didn't shoot it as much as the 19,000 in the arena would have liked. I thought it would be over quick, but the Stars didn't score until the 3:57 mark of overtime, Tyler Seguin's 13th goal from Benn and John Klingberg.


Here we go again
Game over. Now sure, going in, you might think it'd be tough for the Wild to beat first-place Dallas. But the way they lost made it all the more concerning. The Wild dropped to 11-7-4, lost three games in four days at home and have lost five of their past six.

It's the usual, annual Minnesota Wild slump. The past few seasons it's been an issue, though I remember it being more late December/early January rather than late November. But it doesn't really matter. The point is that the same thing is happening again.

It's all about how you respond to bad stretches like this. Last year, it seemed the locker room was counting on some big trade to change things up. Then came Devan Dubnyk who single-handedly saved the Wild season.

You can't count on a trade, boys. Take a look around and figure out how to dig out of the hole. Again.
Posted by Heather Rule at 7:53 PM