Mario Andretti started on the front row for the 53rd running of the Indianapolis 500 in 1969. He was the first car to cross the yard of bricks after 500 miles to earn his first Indy 500 victory. At 29 years old in his fifth Indy 500, it seemed like it would be the first of many wins for Mario.

It just doesn't seem right, really. With Mario and later his sons Michael and Jeff, nephew John and grandson Marco all strapping into a race car, one would think the victories would pile up for the family. While there was plenty of racing success, especially for Mario and Michael, it just didn't seem to happen at Indy. Their bad luck developed into what's commonly called the Andretti Curse.

According to IndianapolisMotorSpeedway.com, Mario had this to say: "When I won it, it was only the second race that I finished there. I dominated more than once. I could have had won it so easily in 1966 and ’67 because I had the car so quick. I was getting really frustrated, wondering what it was going to take. So when I crossed the finish line to win in ’69, it was like a huge weight was lifted off of my shoulders. I thought, ‘At least I’ve got that under my belt, and now we move on.’” 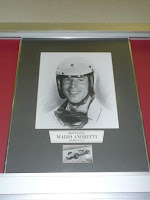 Even in 1969, it's not like the win came easy for Mario. He had to compete in a backup car after he crashed his Lotus-Ford in practice, leaving his face burned up, with burns that were visible on race day. Mario wasn't able to beat A.J. Foyt for the pole but managed to qualify second with an average speed of 169.851 mph in his the Brawner Hawk backup car. Mario started in the middle of the front row in between Foyt and Bobby Unser on the outside.

Perhaps it wasn't significant at the time, but that's a stacked front row of racing legends. Foyt became the first four-time Indy 500 winner, and Bobby won the race three times. They didn't have to contend with another legend, Bobby's brother Al Unser. Al was fast in practice but didn't race that year. He fell and broke his ankle while going motorcycle riding in the speedway's infield.

Before the race, the starting front row drivers pose for a traditional photo shoot with their cars on the front stretch of the track. Maybe this was common knowledge, but I didn't find this out until recently: Mario wasn't in the photo. There was still a guy who looked like Mario but without the facial burns. It was his twin brother, Aldo. I think it was mentioned in a recent Racer Magazine story I read, and Mario mentioned it on the NBCSN documentary, "Drive Like Andretti."

At the drop of the green flag on race day, Friday, May 30, 1969, Mario jumped into the early lead. He surrendered the lead to Foyt within a few laps following some water temperature issues with the Brawner Hawk. Foyt had engine trouble and spent a significant amount of time in the pits, effectively putting him out of contention for the win. Lloyd Ruby led the race at the halfway point, but his own bad luck reared its head when he pulled away from a pit stop with his fuel hose still attached. The tear in his car's fuel tank ended his day and put some good fortune Mario's way.

Mario was all alone in the lead and raced around the 2.5-mile oval for the final 95 laps to earn his first - and what turned out to be his only - Indianapolis 500 victory. He led a total of 116 laps and set a race record finishing at 156.867 mph. Dan Gurney and Bobby Unser finished behind him.

One of the most iconic - yes, iconic - scenes in victory lane at the Indianapolis 500 came with Mario and his car owner, Andy Granatelli. It's been shown over and over in various Indy 500 video montages over the years. After Mario had climbed out of the car, Granatelli grabbed Mario and planted a big, wet kiss on his cheek. At least Mario was able to get a swig of milk first.

The story goes that the kiss from Granatelli is what started the Andretti Curse. Granatelli had his own previous bad luck at the speedway, so perhaps he was passing that along to the Andretti clan. The curse, for those who believe, has been lessened in the past few years as Mario's son and IndyCar team owner, Michael Andretti, has won the big race as an owner after having never won from the driver's seat.

One of the biggest joys for the Andretti family could come in the form of an Indy 500 victory for Mario's grandson and Michael's son, Marco, come Sunday in the 103rd running of the race. What a cool storybook ending to a 50-year chapter that would be for the Mario and his family.