#ThisIsMay: Let the prep for the Indy 500 begin 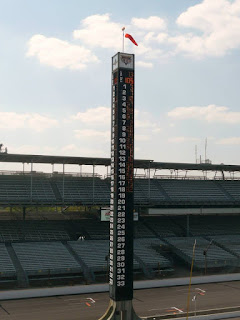 Well, it's May 1, and I've already watched some old Indianapolis 500 footage. That crazy start and spectacular close finish to the race in 1982 were just so good.

I might be a little excited about what's coming up in the sports world.

First of all, the Minnesota Twins are off to an incredible, and perhaps surprising (to some) start, leading the American League Central Division with a 17-10 record through the end of April and crushing 50 home runs. It's been fun to watch so far, with the power this team has displayed. Eddie Rosario leads the AL in home runs with 11, Byron Buxton is healthy and showing his speed in center field and along the base paths, Willians Astudillo is one of the most popular players here in years (though he's on the injured list at the moment) and the starting pitching has gotten the job done for the most part. See Jake Odorizzi and Martin Perez from this week against the Houston Astros as exhibits A and B.

It would be nice if the Minnesota weather cooperated a bit, considering that May has arrived. On the bright side, only one April game was postponed because of snow this year instead of the three-game weekend series that was called for a blizzard. So, in the words of Minnesota meteorologists everywhere: We'll take it.

Either way, there's been plenty of good baseball so far, and I hope it can continue into May.

But really, the month of May is always exciting if you're an open-wheel racing fan. Yes, the countdown is on for the greatest spectacle in racing: The Indianapolis 500. This year will be the 103rd running of the race, held traditionally on Memorial Day weekend.


This isn’t just any month. It’s ours, the one we live for all year long. #ThisIsMay


There's already been some recent buzz about possible changes to qualifying, like having guaranteed spots for full-time drivers. This debate sparked after last year's qualifying runs when fan-favorite and full-time driver James Hinchcliffe failed to make the show. But no such changes are on the books for this year's race.

The entry list was released Wednesday, with 36 cars entered for a field that will get bumped down to the traditional 33.

Seven Indy 500 champions are in the field, including five of the past six winners (minus Juan Pablo Montoya who won in 2015). Helio Castroneves once again isn't a full-time driver in the NTT IndyCar Series, but he'll be back with the powerhouse Team Penske to try for his record-tying fourth Indy 500 victory. Castroneves was the last back-to-back winner in 2001 and *2002, plus he hit victory lane in 2009.

*I also say Castroneves is a two-time winner, because I'm Team Paul Tracy and believe he was the rightful winner of the 2002 race. Tracy made a pass for the lead near the end of the race, but it was around the time a caution flag came out for a crash and the scoring went back to the previous lap when Castroneves had the lead.

Anyway, last year's series champion, Scott Dixon, is another past winner, having won in 2008. Dixon is one of the veteran drivers in the field, and it would almost be a shame to have him only get one Indy 500 victory in his career. Although, somebody was watching over him in the 2017 race when he walked away from a scary looking crash.

Another veteran, Tony Kanaan, had his share of bad luck before finally getting a win in 2013. Three drivers who won under team owner Michael Andretti will try for their second wins: Ryan Hunter-Reay (2014), Alexander Rossi (2016) and Takuma Sato (2017). Former series champion and Penske driver Will Power is the defending Indy 500 champion. He'll try to become, as mentioned, the first driver to win the race in back-to-back years since Castroneves.

F1 superstar Fernando Alonso returns to the speedway with McLaren Racing. He was the 2017 Indy 500 Rookie of the Year, leading 27 laps before seeing his day end early thanks to a mechanical problem. A big name in motorsports, Alonso will seek the Triple Crown of auto racing: Winning the Indianapolis 500, 24 Hours of Le Mans and Monaco Grand Prix. He would be just the second driver to accomplish the feat.


April's almost over, and we don't want it to stay.

Because when midnight strikes tonight at @IMS... pic.twitter.com/7PaTy9QvqD
— IndyCar on NBC (@IndyCaronNBC) April 30, 2019


In past years, multiple women had entered the field. This year, Pippa Mann, of England, is the only woman looking to make the show. She was heartbroken last year as she joined Hinchcliffe as the two drivers who failed to accomplish the task.

Qualifying is the weekend of May 18-19 (please be kind, Mother Nature). Race day is on May 26. For the first time, it will be televised on NBC. All previous telecasts were on ABC.

There are always even-number anniversaries to look back on each year. This time around, it's a rather big one as Mario Andretti will be honored; he won his only Indy 500 in 1969, 50 years ago. His grandson Marco will try to break the Andretti Curse and become the second Andretti driver to reach victory lane. It's also been 30 years since Emerson Fittipaldi and Al Unser Jr. touched wheels near the end of the race, sending Little Al into the wall and Fittipaldi to the checked flag. It's been 40 years since Rick Mears won his first of four Indy 500s.

I've already got my ideas churning for other posts throughout the month of May, which plenty focus on Mario and the Andretti clan. I hope you'll come back to read some more of what I have to share.

In the meantime, I'm sure I'll keep venturing over to YouTube to find old Indy 500 clips. I suggest others do the same.
Posted by Heather Rule at 11:54 PM