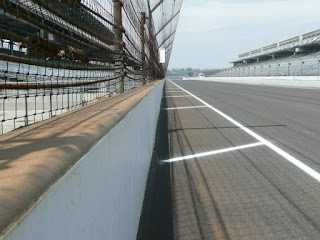 In sports, like with other things, anniversaries or milestones are celebrated with round numbers. Fifty years, 200 games, 1,000 hits. It gives people the opportunity to reflect and remember, even if the round number is simply a round number.

That said, I figured I'd take a look at the round-number anniversaries when it comes to the Indianapolis 500 this year. It's 2019, the 103rd running the great race. The biggest milestone being talked about is the 1969 Indy 500, Mario Andretti's lone win 50 years ago. I'm definitely touching on Mario and 1969 on some other blog posts, so stay tuned.

1979
Rick Mears is one of three drivers in the four-timers club when it comes to Indy 500 victories, along with A.J. Foyt and Al Unser. During qualifying for the 1979 Indy 500, Tom Sneva was looking to win the pole for the third straight year, something no one had ever done before. Sneva had provisional with an average speed of 192.998 mph. But it was Mears who bumped him from the top spot to win the pole, going 194.847 mph for Team Penske.

It was Sneva and Al Unser joining Mears in the front row, and Unser took off at the drop of the green flag and led 85 of the first 100 laps, only giving others a chance on pit stops. Unser was driving a new car in that race, a Cosworth-powered Chaparral nicknamed the "yellow submarine" because of the paint scheme. His new car let him down on lap 105, however, as smoke came out of the rear of the car.

His brother Bobby Unser took over, with Foyt and Mears close behind. Mears took the lead on lap 182 when Bobby had to drop out of the race. This certainly wasn't a case of Mears being dominant all day. He capitalized on others' misfortunes and had to drive a clean race. He led just six laps before taking the lead in the final stretch. The young Mears had to keep Indy 500 champion Foyt at bay. Foyt's car also let him down though.

With a late restart on lap 196, the 27-year-old Mears had just a few laps left to maintain his lead, which was aided by lapped traffic in between him and second-place Foyt. The veteran driver didn't get a good jump on the restart, and his car slowed and crawled to the finish line thank to engine trouble. Foyt still took runner-up honors.

It was the first of four Indy 500 victories for Mears, three of which would come from the pole position (a race record).

This goes to show you how long ago this race actually was, because not only was it the first Indy 500 win for Mears, it was just the second for team owner Roger Penske. The Penske name has become synonymous with success throughout the past few decades. He's won with drivers like Al Unser Jr., Helio Castroneves, Sam Hornish Jr. and Will Power. Penske driver Simon Pagenaud will start on the pole this year, the 18th pole for Team Penkse.

The Rookie of the Year award in 1979 went to a guy with a great racing name, Howdy Holmes, who took seventh place.

1989
It's not one of the closest finishes in Indy 500 history, but it's certainly one of the most exciting ones. And really, had the result been different, fans might not have been treated to such emotion in victory lane three years later from Al Unser Jr. when he choked back tears as he said "You just don't know what Indy means" after he won what still holds up as the closest finish in Indy 500 history.

Emerson Fittipaldi qualified third to start on the outside of row one, reaching 222.329 mph. The average qualifying speed for the field of 33 reached 216.533 mph to mark the fastest field in Indy 500 history to date. Fittipaldi jumped to the lead on the first lap of the race, setting an opening-lap record with 209.200 mph, 7 mph faster than the record Michael Andretti set in 1986.

Fittipaldi led for much of the way and was aided by Mears and Michael Andretti dropping out of the race thanks to engine problems. Unser Jr. was second and got closer after he stayed out instead of pitting late in the race to get more fuel. Lil Al chased down Fittipaldi and grabbed the lead with five laps to go on a move on the inside along the backstretch.

With 1.5 laps to go, the two leaders came across lapped traffic on the backstretch. Fittipaldi was on the inside of the track, with Unser Jr. diving down as well to get by another car. They ran side-by-side into turn three when they touched wheels, sending Lil Al's car into the outside wall. Fittipaldi continued on, eventually taking the checkered/yellow flags to win his first Indy 500.

Once Lil Al was out of his car, he walked up the track onto the apron on the final lap, wanting to salute Fittipaldi in some way as he drove by on his way to victory. Luckily, he kept it PG with what many saw as a sarcastic clap-and-thumbs-up gesture.

Fittipaldi found the finish line first after he came in second in the 1988 race won by Mears. He's also one of the few drivers to win both a Formula 1 championship and the Indianapolis 500. Unser Jr. still finished second, as he and Fittipaldi were six laps ahead of the rest of the field. If both cars would have crashed with the contact, it would have been the first time since the 1912 race that a driver would have had to unlap himself in order to pass the crashed leading car for the victory. Fittipaldi also became the first Indy 500 driver to win $1 million in prize money.

Fittipaldi and Unser Jr. are each down in history as two-time Indy 500 winners, with Fittipaldi also winning in 1993 and Lil Al winning in 1992 and 1994 before both failed to make the field in 1995, the final year before the dreaded CART/IRL split.


1999
I'll make this one really simple. This was during the CART/IRL split years, aka a time when my dad and I didn't pay much attention to Indy since we were CART fans. Kenny Brack won the race. That is all. Brack ended up in CART, so I have nothing against him. I'm just a firm believer that split is something from which open-wheel racing will never totally recover.

2009
For the past 10 years, we've had to hear about whether Helio Castroneves will become the fourth four-time Indy 500 winner. We'll hear it again for the 2019 race. That's because Castroneves won in 2009, giving him his third victory after he won back-to-back in 2001 and 2002, which is also the last time there's been a back-to-back winner of the race.

If any of you pay attention to my racing Tweets, you might have seen me point to Castroneves with an asterisk or refer to him as a two-time winner. That's because of the controversy surrounding the 2002 race. I'm Team Paul Tracy on that one; Tracy made a pass for the lead late in the race around the same time a crash occurred resulting in a caution flag. The ruling was that he didn't complete the pass in time, so the lead and eventual win went back to Castroneves.

The 2009 race, marking the start of the Centennial Era, was also my first Indy 500 that I attended. I'd been there to see the museum and for other events like a Formula 1 race, but this marked my first 500 in the stands. We had seats on the main straightaway behind pit wall. Again, here's another plug to put it on your bucket list to go see the greatest spectacle in racing in person. It's worth it.

Castroneves jumped the start, so officials waved off the first green flag. Once it finally went green, Mario Morales and Marco Andretti crashed into the wall in turn one. Remember kids, you can't win the race in the first corner, but you can certainly lose it in the first corner.

We some saw action along the main straight. Ryan Hunter-Reay crashed in turn four, with his car coming to a halt right in front of us. Graham Rahal left some tire marks on the outside wall as he skidded down the main drag.

Castroneves dominated as Team Penske often does, leading from lap 142 until the finish. He became the ninth driver to win the race three times and was the first non-American driver to do so. This came at the height of his popularity after winning that ABC show "Dancing with the Stars," so at the very least maybe the event got some more publicity out of his win. Castroneves and his crew climbed the fence along the start/finish line in celebration. He was nicknamed Spiderman for his celebrations.

His victory a decade ago was the 20th time a driver won the from the pole position. He's also the last driver that's done it. Winners over the past 10 years have come from a variety of starting positions, including all the way back in row seven.

Castroneves is no longer an IndyCar Series regular, but he's still an entry for the Indy 500. The 44-year-old will start on the outside of row four in 12th position this Sunday.


Information in this post is credited to Autocourse Official History of the Indianapolis 500 Second Edition by Donald Davidson and Rick Shaffer and indianapolismotorspeedway.com.
Posted by Heather Rule at 1:39 PM